VOCAL PLACEMENT: The False Paradigm of "Singing in the Mask" PART III

In Part II we covered the first question which was, "What is the concept of vocal placement or "singing in the mask" trying to achieve?"

In this third article on singing in the mask/vocal placement I want to answer the second question:

2) What actually does happen when a singer tries to "place" their voice "in the mask"?

When a singer is told to try and place their voice, "in the mask" several things usually happens. First, in the singer's attempts to make a buzzing sensation in their "mask area" (which can be anywhere from the cheeks, nose, forehead or all of the above) they usually tend to raise their larynx. That shortens the vocal tract and gives a lighter, "brighter" sound. It also brings in constriction whereby the throat starts to close and the pharyngeal space is narrowed. That cuts down on vocal resonance.

Additionally, with the larynx raised in this position the singer also lets go of "chest voice" involvement. And let me be clear here, "chest voice" has absolutely, unequivocally nothing to do with one's physical chest area. When one sings in chest voice it simply means that the thyroarytenoid muscle that runs through the vocal folds is engaged. In full chest voice this muscle predominates. In headvoice it is also still active, but less so than chest. Chest voice gives off the acoustical energy that is then resonated by the vocal tract. Without this energy the singer loses clarity and power.

In order to maintain proper engagement of the chest voice and full resonance the larynx *cannot* be raised. It should be in a mid to mid low position. When singing in chest voice the thyroid cartilage moves forward and down. So if the larynx (thyroid cartilage involved) is moving up, the singer is stuck with having to let go of some of the chest involvement, resonance or both. This is why we hear 99% of singers today with a much lighter, brighter, more nasal sound than in decades past.

It should also be pointed out that chest voice - or the thyroarytenoid participation - aids in approximating the vocal folds. If you let that go you also let go of some of the approximation which causes even more of a loss of acoustical energy. And the approximation has to be made up by other muscles in order to keep the sound clear. This causes an imbalance whereby certain muscles are being overused or hyper functioning. This will cause anything from breathy sound to constricted sound depending on which muscles are overused.

And the snowball effect continues. When the chest voice is let go of it also causes issues with the vibrato action. In an ideal set up (which I have covered in a previous article on "falsetto") the vocal folds are held by the arytenoid cartilages in the back. One vocal fold goes to each cartilage. And in the front, at the Adam's apple, both vocal folds meet in a V. 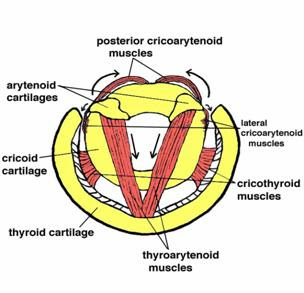 Those cartilages stay in place by the antagonistic tension of the lateral cricoarytneoids holding against the posterior cricoarytenoids. So a stasis of the cartilages is maintained as both muscles tense as the LCA move the arytneoid cartilages one way and the PCA move them the other way. And the vocal folds are attached to each cartilage. Now, the vocal folds are then stretched in the front (where the Adam's apple is) by the cricothroid muscles. In order to *approximate* or bring the vocal folds together the oblique arytenoids, transversus arytenoid, and the thyroarytenoids (chest muscle) must be brought into action.

If the above scenario is not maintained by the proper use of the voice, and chest voice gives out, there is no "anchoring" to the vocal folds by which they can be stretch for pitch AND for vibrato. Vibrato has an oscillation or pitch change. That means that the vocal folds are stretched and relaxed intermittently at a pulse of about 6 times per second. If the singer lets go of chest voice the above setup is altered. Any number of the above muscles must make up for the larynx thus being raised, loss of approximation of the vocal folds etc. So the vibrato is affected. And what usually happens in that case is the singer develops a tremolo or "caprino" vibrato. They also will have a much lighter and brighter sound along with it. If the singer tries to maintain a fully chiaroscuro sound, but lets go of chest they will either be constricted or woofy. Unfortunately all of those sounds are what we hear today on the operatic stage.

VIDEO WHICH DEMONSTRATES THE PROBLEMS WITH THE SINGING IN THE MASK APPROACH: